You are here: Home / Energy / Wind Energy System for Electricity Generation: All You Need to Know

The concept of energy system as a source of power is as old as human beings. Men used to with the power of wind. The people in past used wind energy in milling machines. Chinese used to pump water with long tower windmill. There were sawmills for cutting logs and lumbers. Men had to harness , coming up with brilliant ideas to make his life full of comforts.

Today, scientists are using wind energy as a renewable source of energy to generate electricity.

What is a Wind Energy System?

Wind is movement different gasses or air in the horizontal direction flow from higher pressure to lower pressure region. Speed and direction are two parameters to specify wind. Have you ever thought, what causes the wind to blow?

The wind blows because of the difference in air pressure and the rotation of the earth. Due to the uneven heating of the earth because of solar radiation some regions of the earth get warmer while the rest of the regions are colder. Warmer regions receive more light and heat from the sun while colder regions receive less light and heat from the sun. Warmer regions have warm air (lighter in weight) while colder regions have cold air (denser in weight). This causes a difference in air pressure and air temperature. Of course, higher the difference in atmospheric pressure, the higher the speed of the wind.

Wind energy or wind power is the process of generating electricity with the help of wind. As we discussed, in motion is called wind. You know everything in motion possesses kinetic energy. So, wind also has kinetic energy. Men harness this kinetic energy of winds and used to generate mechanical energy which in turn converts into electrical energy.

It is a power generating device, which converts energy of wind into mechanical energy, which is then converted into electricity and send to the grid. It is one of the most efficient to convert wind energy into mechanical energy. Wind turbines can either be Horizontal Axis Wind Turbines (HAWT) or Vertical Axis Wind Turbines (VAWT). The difference between the two categories is the rotational axis.

Wind farms are the dedicated area of land, where a large number of wind turbines are installed for generating electricity. The wind farms are designed in such a way that the land should not waste. For example two turbines are separated from each other by a calculated distance, mutual interference. Also, the land can be used to and livestock rearing.

Offshore (on the sea) winds arise from the sea. Offshore farms generate electricity from sea breeze or install near the .

HAWT is further classified according to the number of blades. That is single blade rotor, two blades rotor and three blades rotor.

Another classification of HAWT according to the position of a rotor. Upwind turbines and downwind turbines.

I am not going into the details of various kinds. You can easily understand the design and its properties here.

So, let’s get started.

Wind turbines have heavy, bulky and very tall structure, they need a strong foundation. Modern turbines are even taller, heavier and powerful. Onshore and offshore wind turbines need different types of foundations. Of course, the foundation should be strong and rigid enough to support such a huge structure. For example, GE-1.5 megawatt model whole assembly weighs 164 tons and a total height of 328 feet [5].

Connection to the grid is necessary because if the wind is not enough to generate electricity. Grid supplies your electricity needs. When the  blows, the excess power is fed back to the grid.

Tower height consists of 40m to 100m. Taller towers capture more energy and hence generating more electricity. If the tower height doubles then its diameter is also going to be doubled. Tubular steel, lattice steel or concrete towers are popular. For HAWT the tower height must be two to three times greater than blades length.

In order to access the top of the tower, for maintenance and repairs, stairs are provided inside the tower.

Yawning is the movement of the turbine along the vertical axis. Yaw mechanism consists of the yaw motor. Yaw mechanism orients turbines to move according to the wind direction and speed. It is a part of upwind turbines only. The yaw mechanism communicates with the wind vane (through the controller) and turns the nacelle with the help of motors.

The Nacelle is nothing but the housing of generator, gearbox, braking system, shafts etc. It is a lightweight box made from glass fiber. It connects the  to the rotor.

In a  power system, we cannot alter wind speed and hence we cannot speed up the prime mover (rotor blades).

As you know anemometer is used to measure the speed of the wind. And wind vane tells us the direction of the wind. Of course, this is an important part for controlling the turbines automatically.

Wind turbines are designed to work in moderate weather. If there is wind speed greater than 25m/s then a signal from anemometer to the controller and controller shuts off the turbine. Similarly, turbines don’t work if the wind speed is as low as 5m/s. This system automatically takes the decision and protects the turbine in extreme weather.

Aerodynamic brakes are used to turn the rotor blades perpendicular to the direction of the wind. All commercial HAWTs control pitch angle of their rotor blades, to minimize rotation speed.

The blades are foremost part of a turbine. Rotor blades are connected to the rotor hub. They face the wind, as the wind blows, blades try to rotate and lift according to the wind speed and power. The blades transmit power to the  hub.

Blade pitch control or blade angle adjustment. It is used to adjust rotation speed. Wind turbines have maximum and minimum speed limits. If the wind blows above or below these ranges turbines shut down. Pitch is an important part of large turbines. Wind turbines are designed to produce optimum output. But how this optimum output can be generated if the wind blows faster or slower than the optimum range. The speed and power of wind change frequently. The purpose of blade pitch is to adjust the blades (blades turn along the longitudinal axis) according to wind condition. For faster winds, it exposes less surface area to the wind.

Rotor hub connects the rotor blades to the rest of the system. Rotor hub and rotor blades collectively called rotor. The rotor hub is connected to the .

This is an electronic controller effectively controls the turbines. You can optimize or control the power output of turbines by these control methods.

1.   The shape and the length of blades

The output of a  turbine is directly proportional to the size of blades. Larger the size of blades, the higher the output power. Of course, large blades can capture more wind energy than smaller once. Or you can say that the larger blades can translate kinetic energy of wind into mechanical energy and hence increase electrical power output.

3.   The direction and speed of wind

The output of the wind turbine is dependent on both the speed and density of the wind. Of course, higher wind speeds tend to rotate blades faster. Due to the  rotation, more mechanical energy converts into electrical energy.

Betz Limit on Efficiency of a Wind Energy System

The constant 0.593 in the above equation is the Betz Limit. It was introduced by Albert Betz, a German physicist, in 1919. According to Betz’s law, no turbine can capture more than 16/27 (59.3%) of the kinetic energy in wind. The factor 16/27 (0.593) is known as Betz’s coefficient. So, the efficiency of a wind energy system can not surpass the theoretical limit of 59.3%. Practical utility-scale wind turbines achieve at peak 75% to 80% of the Betz limit.

The faster the wind speed, the greater the output of the turbine. It means wind speed is a major factor that can affect the efficiency of the whole system. Whenever someone decides to erect wind turbines, it is advisable to look into wind conditions at that place, for at least one year.

The third factor is air density, which is dependent on temperature, pressure altitude. Colder air is denser and it exerts more pressure on rotor blades and hence s output power.

Difference between a windmill and a wind turbine/Wind Energy Sytstem

HAWT are noisy and are popular in areas away from downtown. Commercial wind turbines produce noise just like a small jet plane. It causes health problems and noise pollution. In urban areas or home-based wind turbine systems utilize vertical axis wind turbines (VAWT). Vertical axis turbines are the first choice for homes because it requires less space and is less noisy. But the  of a VAWT may be less that of a HAWT in a wind energy system.

How do wind turbines work when there is no wind?

If there is no wind, no electricity is produced. To derive a turbine the wind speed should be greater than the cut-in speed (that is approximately 4m/s). The anemometer is there to measure the speed of the wind.

We hope you’ve found out about the basic functioning of a wind energy system and how they convert wind energy into electric energy. There are other energy resources that need to be discussed in detail.

You may also want to read how electric energy is transmitted from generating stations to consumers and Load flow analysis of a power network. 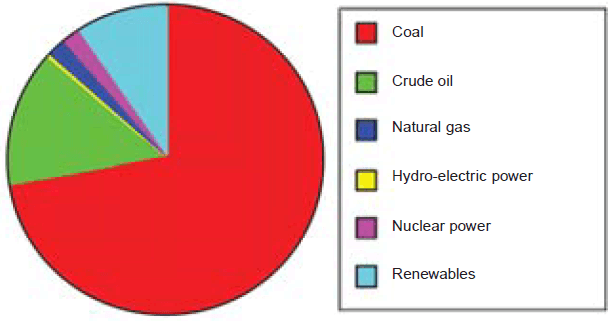 Amna Ahmed is a passionate writer. She has been an educational blogger since 2012. She belongs to Karachi, Pakistan. She has completed her B.E. electronics engineering from a reputable institution in 2011. She loves electronics and loves to read and write anything related to electronics. She is good at writing literature reviews, lecture notes, technology reviews. She blogs at Basic Electronics Guide.