This post gives a complete list of final year project ideas for electrical engineering students. A short summary (or synopsis) of the project has also been given to get the complete understanding of the project. The summary contains a short introduction, methodology and project outcomes.

Undergraduate students of BSEE are encouraged to pick a topic that would implement a novel research idea. Though, only simulations can also be used instead of a design project. Various simulation softwares are available to implement the FYP e.g, Matlab/Simulink, Power World Simulator, ETAP, Digsilent PowerFactory, PSCAD etc.

The list has been categorized into two sections based on a graduate’s specialization. 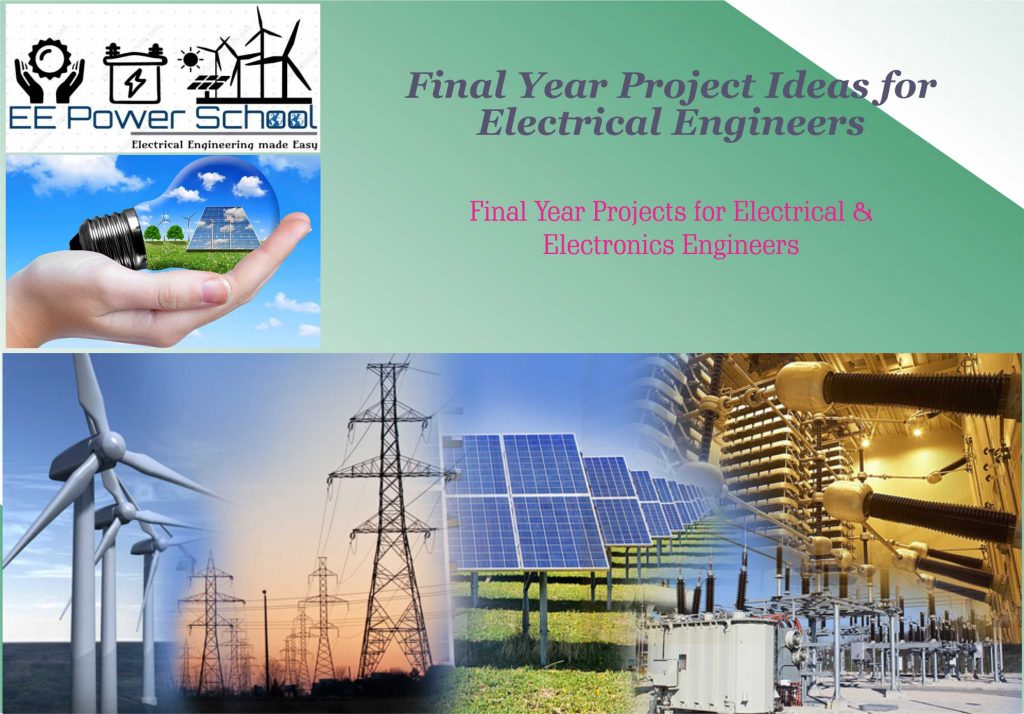 The generation of power from Distributed Generation (DG) is increasing day by day as this technology is not only becoming cheaper relative to other resources but is also environmentally friendly. However, DG can also have an adverse impact on the operation of the existing power grid. For example, issues related to power system (PS) stability, PS quality and protection coordination can occur due to the connection of DG to the grid. Fault current limiters (FCL) are employed to reduce the negative impacts of DG in power networks. The purpose of this project is to investigate the impact of a fault current limiter on the fault current level, losses and stability of a power network with DG connection. The research will also focus on finding the suitable type and location of an FCL for fault current reduction and increasing the system stability in the presence of DG.

Design & Control of FACTS devices for improvement in grid stability

An electrical power system is a large interconnected system, which requires a careful design in order for continuous electric supply to consumers. FACTS (Flexible AC Transmission System) contains devices which are used to enhance power system reliability & stability. STATCOM (Static Compensator) is one of the FACTS devices used for such purposes.
This project discusses the impact of FACTS devices on power transmission system reliability and stability. And depicts how such devices makes voltage profile better and reduce transmission losses by reactive power compensation.

Multilevel inverters have gained a huge importance in power systems, particularly, for distributed generation. Our students have also been working on multilevel inverters for two years. A few issues were identified in the most popular Cascaded Multilevel Inverter (CMLI) designs and a novel design was proposed. Our proposed design uses a transformer with tapped primary winding and different tapping are power (one at a time) in such a way that we get a stepped sinewave at the output. The proposed idea was simulated and implemented in a crude form for a 5 level inverter. This work has shown significant potential in this new topology with several benefits over CMLIs such as it requires a single DC source. This proposed topology needs further developments and evaluation which is the focus of this project.

Various faults occur in power system equipment at all time. Protecting against these faults is a vital job for the proper functioning of the power system.
This project will elaborate on the importance of difference protective relays and their function to protect power system equipment.
The project will consist of two phases:
1. Simulation phase
2. Experimental phase
In simulation phase, simulations of a practical system will be performed in a suitable software and results will be validated based on practical data available. For experimental phase, a simple scheme will be implemented by using the protection, distribution & transmission modules available in the lab. The results obtained by this experimental scheme will also be backed by simulations.

The microgrid comprising of different power sources i.e solar, wind and diesel generator along with a variable load will be implemented in PS & SG lab.The synchronized operation of these power sources under load changes will be investigated. Moreover, smart switching of the load from one bus to the other, depending upon the load requirements, to ensure microgrid stable operation will also be focused.

The project focuses on practical implementation of Grid-connected solar power plant and its analyses using modules available in Power Systems & Smart Grid Lab.
The project objectives include:
• Simulation of the given system in Matlab/Simulink according to the specification of modules
• Interfacing of modules with LabVIEW to implement customized Measurement & Control interface through SCADA.
• Predicting power output of solar modules based on emulated weather conditions
• Analyzing the impact of transmission lines on Solar Plant performance
• Studying the effect of transmission line faults on Grid converter performance

A non-intrusive approach for drowsiness detection, based on computer vision. It would be installed in a car and it is able to work under real operation conditions. An IR camera is placed in front of the driver, in the dashboard, in order to detect his face and obtain drowsiness clues from their eyes closure. It works in a robust and automatic way, without prior calibration. The presented system is composed of 3 stages.
The first one is pre-processing, which includes face and eye detection and normalization. The second stage performs pupil position detection and characterization, combining it with an adaptive lighting filtering to make the system capable of dealing with outdoor illumination conditions. The final stage computes PERcentage of eye CLOSure PERCLOS
from eyes closure information.

Digital video techniques have been used for a number of years, for example in the television broadcasting industry. However, until recently a number of factors have prevented the widespread use of digital video. An analog video signal typically occupies a bandwidth of a few megahertz.However, when it is converted into digital form, at an equivalent quality, the digital version typically has a bit rate well over 100 Mbps. This bit rate is too high for most networks or processors to handle. Therefore, the digital video information has to be
compressed before it can be stored or transmitted Over the last couple of decades, digital video compression techniques have been constantly improving. Many international standards that specialize in different digital video applications have been developed or are being developed. At the same time, processor technology has improved dramatically in recent years. The availability of cheap, high-performance processors together with the development of international standards for video compression has enabled a wide range of video communications applications.

Design and development control and sensing system for prosthetic arm

The purpose of this project is to develop a sensing and control system for a prosthetic arm. The project is divided into two phases:

A hardware security module (HSM) is a standalone hardware computing device manages and provides safety to the digital keys for strong authentication and provides crypto processing. These hardware modules are attached to the external network based computer through communication ports and stores the authentication key on it.
These modules can be used in any process that uses digital symmetric and asymmetric keys for security. They also facilitate onboard secure cryptographic key generation, key storage and management. HSMs are also deployed to manage Transparent Data Encryption keys for databases. HSMs provide both logical and physical protection against attacks.

function/systemstem (linear or non linear) can be modelled as an artificial neural network (ANN). Typically, neurons are organized in layers.
Different layers may perform different kinds of transformations on their inputs. Signals travel from the first (input), to the last (output) layer, possibly after traversing the layers multiple times to model the system effectively.
Multivariable systems have deep neural network (DNN) configuration (i.e. multiple layers) the training techniques varies from ANN to DNN. Special hardware implementation is required for an effective DNN. This project is aimed to implement the recurrent DNN methodologies computations on FPGA for classification.

Implementation of different control techniques of a Quadcopter

Quadcopters are the most common type of small UAV helicopters that use the fixed pitch propellers. They not only serve as a platform for research in the field of control engineering but also have military and commercial applications.
A prototype Quadcopter has been developed in DEE. In this project, necessary improvements will be made in the mechanical design and the required electronics. Furthermore, sequential loop closing technique will be utilized to design a controller for the system. The designed controller will be implemented on hardware to demonstrate its performance.

A Gough-Stewart platform is a type of parallel robot that has six prismatic actuators attached in pairs to three positions on the platform’s baseplate. Devices placed on the top plate can be moved in the six degrees of freedom in which it is possible for a freely-suspended body to move. These are the three linear movements x, y, z (lateral, longitudinal and vertical), and the three rotations pitch, roll, and yaw.

Level control systems are an important part of most industrial and residential setups. The objective of this project is to design and build a prototype water level control system for residential use based on the Internet of Things (IoT) concept.
A typical configuration of such a system would involve four modules: two sensor modules for tank and reservoir, an actuator module to start and stop water pump and, a central monitoring and control station module. The communication between these modules will take place wirelessly. The sensor modules will have the option solar power for locations where no electricity is available. The deliverable for this project will be price competitive, working prototype.

Multilevel inverters have gained a huge importance in power systems, particularly, for distributed generation. Our students have also been working on multilevel inverters for two years. A few issues were identified in the most popular Cascaded Multilevel Inverter (CMLI) designs and a novel design was proposed. Our proposed design uses a transformer with tapped primary winding and different tapping are power (one at a time) in such a way that we get a stepped sinewave at the output. The proposed idea was simulated and implemented in a crude form for a 5 level inverter. This work has shown significant potential in this new topology with several benefits over CMLIs such as it requires a single DC source. This proposed topology need further
developments and evaluation which is the focus of this project.

Recently, electromagnetic weapons and defense has gained a huge attention of strategic research community. Electromagnetic propellant is one of the research directions in this regard. Last year a couple of BSEE projects were completed in this area. The aim of this project is to extend the work done previously and optimize the design in terms of achieving the maximum velocity of the projectile and maximum energy efficiency. Both are critical the for effectiveness of coil-guns and their acceptance for real applications. This would be based on mathematical modelling of electromagnetic/electromechanical system, optimization of design parameters such as coil’s physical size and inductance, capacitance, initial voltage at capacitive supply etc. It is intensive mathematical work that would result in novel contributions to this field. Moreover, input power supply design using chargeable batteries and design of different switches will also be considered.

To get some more final year project ideas for electrical engineers, you may like to visit a previous post on this topic. For guidance on how to implement a specific project, feel free to contact and comment.

You got a final year project of your own? Share with all of us in comments.

Buy Me a Coffee