The next few sections provide details on the rotor blades and the connection element between the tower and machine housing.

The weight of up to 400 t exerted by the machine housing needs to be transmitted via the tower to the foundation. Reaching a height of 170 m, the tower can have one of the following designs:

Employed in the majority of cases are tubular steel towers comprising individual sections of steel tubing screwed together by means of connecting rings. Made of steel with good welding properties, these seamless, rolled rings reach diameters of 4 m.

A tower’s foundation type depends on the wind power plant’s size and ground conditions. A decisive factor here is the depth to which ground layers capable of absorbing the expected loads can be found. Possible types range from shallow, plate foundations to deep, pile foundations.

For instance, a plate foundation for a wind power plant with an electrical capacity of 1 MW can have the following volumetric dimensions:
13 m x 13 m x 2.5 m.

Foundations for offshore wind power plants in the open sea, away from coastlines, are much more elaborate. We will not consider them in this course.

For a wind power plant to remain efficient, the rotor must always be aligned exactly against the headwind. Because wind frequently changes direction, the pod to which the rotor is affixed has a swivel mounting on the tower.
Installed on the pod is a sensor that registers the instantaneous wind direction. The wind power plant’s electronics regularly poll the sensor and make the pod track any changes in wind direction.
The mechanism connecting the pod to the tower is a large roller bearing controlled by an electric wind tracking drive, often termed azimuth drive (azimuth is a term of Arabic origin signifying angular direction along the horizon).

The connection element of a V82 manufactured by VESTAS is illustrated below.

The pod is often furnished with brakes that prevent it from swinging out of the wind path. Such brakes are needed especially if the tower has roller bearings. The brakes are released immediately before the azimuth drive starts to move the pod.
A problem can be posed by the electric cables which transport energy from the generator to the power grid. Running through the tower, these cables are affixed to the pod as well as the foundation. When the pod tracks the wind, the cables twist, which is alright up to a certain limit. However, if the pod continues to track in the same direction, the cables continue twisting to a point where they might get damaged. To prevent this from happening, a torsion register monitors the pod’s swiveling and initiates opposing motion once a certain number of swivels in the same direction have taken place. This straightens the cables again.

The rotor on most wind power plants possesses three blades. These blades are subjected to extraordinarily high loads, e.g.

For instance, the bending moment attributable to deadweight generates up to 100 million stress cycles during a wind power plant’s service life. In the case of a medium-sized plant with a rotor diameter of 54 m and a rotational rate of about 25 rpm, the rotor blade tips travel at a speed of about 255 km/h.

Rotor blades are usually made of a fibre-glass composite material containing polyester resin or (the more expensive) epoxy resin. The blades comprise a shell-type structure over light spar webs. The connection between the blade and rotor hub is of special importance due to the forces exerted here by the composite fiber structure on the metal bolts.

When lightning strikes a rotor blade, it usually does so near the tip. Consequently, rotor vanes are furnished with receptors (metal contacts a few centimetres in size) which absorb the lightning’s energy and discharge it through a lightning conductor specially embedded in the blade via the pod and tower to the earth.

The rotor blades and shaft are connected together via the hub, which also contains the blade bearings and blade angle adjustment mechanism on wind power plants furnished with such a mechanism.
Large roller bearings with internal toothing are used to mount and adjust the rotor blades.

On wind power plants with blade angle adjustment, an electronic sensor constantly measures the power and actuates the blade adjustment mechanism if the power exceeds a certain level. The mechanism immediately slants the rotor blades slightly out of the wind. Once the wind has dropped again, the blades are slanted back into the wind.
The rotor blades need to be turned about their longitudinal axis for this purpose.

Many older plants do not have this feature, the rotor blades being rigidly connected to the hub. This design is generally considered obsolete now.

The machine housing contains the generator needed for producing electrical energy. Illustrated below is the power train on a wind power plant of type V80 manufactured by VESTAS.

The generator is described in more detail in subsequent parts of this series.

The machine housing also contains additional equipment such as electronic controllers, hydraulic systems as well as optional features such as gears, brakes and cooling units (fans).

Every plant type is differently configured. Illustrated below is the machine housing on a wind power plant of type V90 manufactured by Vestas.

We hope you’ve liked this article on various design features of wind power plant systems. This course on wind power plants, you’ll learn about the basic functioning of a wind turbine and how they convert wind energy into electric energy. There are other energy resources that have been discussed in detail. Continue learning this series on wind power plants to learn more.

You may also want to read the History of Wind Turbine and working of horizontal wind power plants. 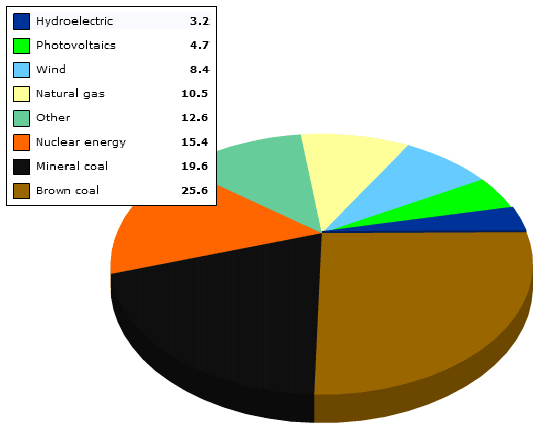