In previous articles, you get to know about wind turbine and how it converts energy. We discussed important parts of a horizontal axis wind turbine. This article is intended to provide the function of each component in a wind turbine and the overall working of HAWT, control mechanism and control strategies, factors affecting the efficiency of the wind turbine.

We consider HAWT upwind turbines with three blades. This configuration is the most popular commercially.

The more the number of blades, the slower the rotor speed. So, turbines with 3 blades are relatively slower but will gain a high efficiency and a high torque. Wind turbines with a single blade high-speed wind turbines.

As we discussed in a previous article, in upwind turbines rotor blades and nose face towards the wind. Wind vane detects the direction of air, while mechanism is there to maintain the position of the rotor as the direction of wind changes.

What happens when air strikes the wind turbine blades?

As the wind strikes the blades, it tends to rotate them due to aerodynamic forces. Blade pitch control is an electronic control for blades. The power output of the turbine is monitored every second. As the power output reaches the rated limit, then controller immediately adjust (pitch) the blades a few degrees.

Now it’s time to introduce angle of attack. The angle at which the blades adjusted, to get optimized wind energy, and hence maximize the power output.

Furling of means decreasing the angle of attack. Blades are adjusted in a way that edges are facing towards the wind. It is applicable when there is strong wind and less wind energy is enough to drive the turbine.

We don’t want to get maximum wind energy because wind turbines are designed to operate in particular wind speed (the rated speed for most turbines are 5m/s to 25m/s). Strong winds may damage the turbine, so mechanical and electrical brakes are provided, to stop the turbines.

Wind Energy conversion inside the Nacelle:

system is there to limit over speed or it is used to stop whenever it is needed.

How does a wind turbine generator produce power at rated frequency?

Just think about it, wind speed never remains constant, so the output frequency changes whenever wind speed changes (Read electrical generator in the previous article). Of course, this is not going to happen. The electronic controller is there that keeps output within the limited range. The output frequency can be maintained by employing these ways.

It is a simple and easy method, requires less complicated gearing mechanism. The block diagram of the  converter is given below.

It is a generator that can deal with unpredicted weather conditions and hence variable and uneven wind energy. It can work with variable wind speed and produce constant output frequency.

output of a wind turbine:

You must know about Betz law. It is the law by which you can determine the amount of power you can generate, irrespective of the design. According to Betz law, maximum 59.3% of kinetic energy of wind, a wind turbine could capture. The factor 59.3% is called coefficient. The output power of the  turbine is:

Where
ρ = air density
A = blades swept
V = velocity of the wind
CP = power coefficient or efficiency of the wind turbine (CP is always less 59.3%. In practice, this value wouldn’t achieve).

Cut-out speed is the maximum speed for turbines. Beyond this limit, there is a risk of damage. The braking system is there to stop the rotor. Cut-out speed is usually around 25 m/s.

We hope you’ve found out about the basic functioning of a wind turbine and how they convert wind energy into electric energy. There are other energy resources that have been discussed in detail.

You may also want to read how electric energy is transmitted from generating stations to consumers and Load flow analysis of a power network. 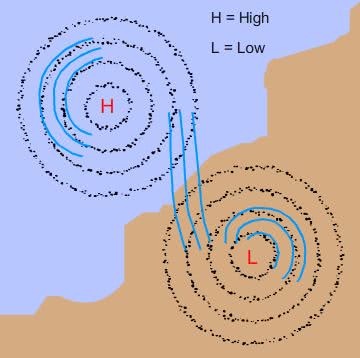 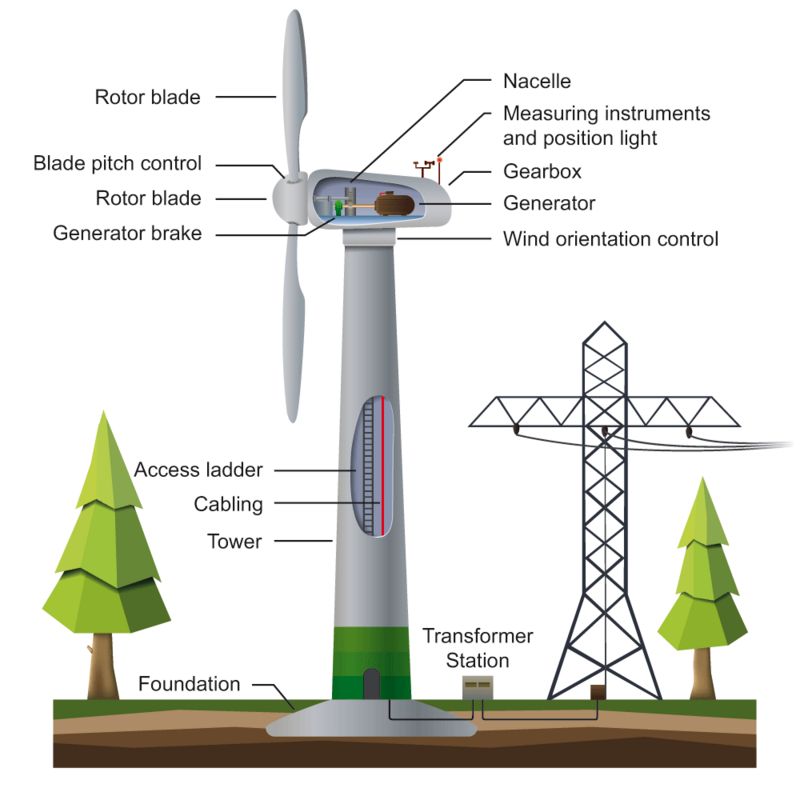 A First Course on Basics of Wind Power Plants

Amna Ahmed is a passionate writer. She has been an educational blogger since 2012. She belongs to Karachi, Pakistan. She has completed her B.E. electronics engineering from a reputable institution in 2011. She loves electronics and loves to read and write anything related to electronics. She is good at writing literature reviews, lecture notes, technology reviews. She blogs at Basic Electronics Guide.